You are here: Home | Publications | POLICE BRUTALIZATION OF IGBO WOMEN IN OWERRI: ANOTHER SORE WOUND OF THE REPUBLIC

POLICE BRUTALIZATION OF IGBO WOMEN IN OWERRI: ANOTHER SORE WOUND OF THE REPUBLIC

POLICE BRUTALIZATION OF IGBO WOMEN IN OWERRI: ANOTHER SORE WOUND OF THE REPUBLIC 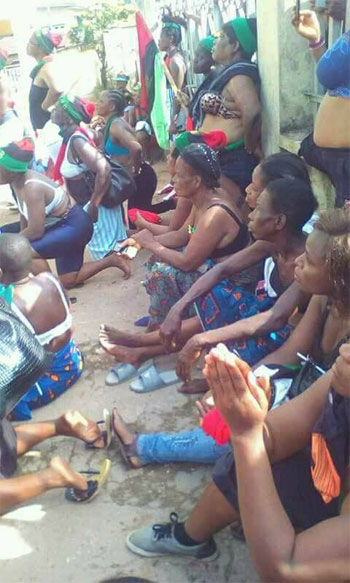 POLICE BRUTALIZATION OF IGBO WOMEN IN OWERRI: ANOTHER SORE WOUND OF THE REPUBLIC
…………………………………………………….
On the orders of the Federal Government of Nigeria led by President Mohammadu Buhari and acting through the Nigeria Police Force, a large number of defenceless and unarmed Igbo women in Owerri numbering about one hundred and twenty seven (127) and ranging from ages 22 to 70 were on 17th August 2018 tear- gassed, beaten up and subsequently hauled into several prisons located in Imo State to spend an indefinite amount of time just for the sole reason that they marched round the town singing songs that asked for the release of Nnamdi Kanu who is the leader of the recently proscribed Independent People of Biafra(IPOB). Nnamdi Kanu was last seen in the public at Umuahia in September 2017 when the military illegally raided his father’s house where he was living.

Just as the Federal government through its military illegally raided Nnamdi Kanu’s abode without any legal authority, same treatment was meted out to these defenceless, unarmed and vulnerable Igbo women who after being tear- gassed and beaten up were subjected to an illegal criminal proceedings normally precipitated by what is known as Holding Charge.

Holding charge is actually an illegal way the Police or the government normally used in circumventing its citizens’ right to liberty guaranteed under the Nigerian constitution. A holding charge is not a valid criminal charge but a request by the government for the remand of its victim in prison pending whenever it is ready to formally charge its victim to the proper court.

The Supreme Court of Nigeria has held in several number of cases that such charge and proceedings in the lower courts in Nigeria is unknown to Nigerian jurisprudence and therefore illegal. Despite this, that practice still remains prevalent in the Nigerian Criminal Justice System and is mostly used by the state to punish anyone who speaks out against it.

One of the saddest things about this illegal charge is that on the average, it takes nothing less than two years for the government to formally bring whoever is accused on that illegal charge to the right court and to make matters worse, anybody hauled into jail on that fathom charge is never entitled to bail because most times, the nature of the trumped up offences contained in that illegal charge is always capital in nature. Capital in nature means that such offences attract a minimum of life sentence in prison or death upon conviction.
It is with such offences that these 127 Igbo women were charged before a magistrate court after having been tear-gassed and beaten up for doing no wrong.

It is apposite to note that the brutalization of the 127 Igbo women by the Nigeria Police Force came less than 24 hours after the Federal Government announced that it will soon commence another phase of “Operation Python Dance” in the whole of South East states. It is also instructive to note that it is this same “Operation Python Dance” that was carried out a year ago where scores of Igbo youths were killed by the military and hundreds of Igbo youths hauled into prison till date without trial and Nnamdi Kanu allegedly taken into custody by the military.

The 127 Igbo women’s rights were vigorously pursued and victory gotten for them when on the 24th of August, 2018, they were unconditionally discharged and released by a High Court of Imo state on the application of their lawyers to the court against their unjust incarceration. The ruling of this court discharging them of all the fathom charges brought against them by the police and ordering their unconditional release has highlighted the unconstitutionality of the government’s actions. It has also made double assurance the Nigerian citizens’ right to lawful protest which cannot be taken away by the law enforcement agencies acting on the orders of the federal, state or local governmentS.

It is pertinent to observe that while Buhari was quick to move against the Igbo Women and got a whooping 127 number of them arrested and charged to court within 24 hours, he is yet to arrest the herdsmen that have been killing thousands of Nigerians and sacking villages and towns all over the country.

It is also pertinent to observe that while Buhari is slow in negotiating and is indeed unable to secure the release of one Christian girl, Leah Sharibu and the other unreleased Chibok girls who have been kidnapped by the Islamist terrorists in the North East part of the country, he is quick to deploy huge resources of the state to teargas, beat up and haul into prison unarmed, defenceless and peaceful Igbo Women who never committed any crime nor did him any wrong.

There is already a strong perception and suspicion in the entire South East states of Nigeria that the Buhari led Federal government is hostile to the Igbos who make up the South East states and these suspicions are founded on concrete facts of gross discriminations against the Igbos, one of which is the recent brutalization, beating, maiming and illegal sending into prisons the one hundred and twenty-seven Igbo women who gathered in Owerri to conduct a peaceful protest march asking the government to release the leader of the proscribed IPOB, Nnamdi Kanu.

The Buhari led Federal government is hereby reminded that its illegal actions in tear-gassing, beating, maiming and detaining the 127 Igbo women (who were on a peaceful march in Owerri) have no space at all in a civilian democratically elected government and in a country where the supreme power is held by the people. At the least, and for whatever it is worth, the government is hereby advised to immediately tender an unreserved apology to the women with a promise that such will not repeat itself.
Doing otherwise or keeping mute about this monstrous illegality committed against the 127 Igbo women will only help to foster the growing hatred and ethnic tension brewing in the country.

A word is enough for the wise.