You are here: Home | Publications | A LETTER FROM THE GRAVE: How I died in prison 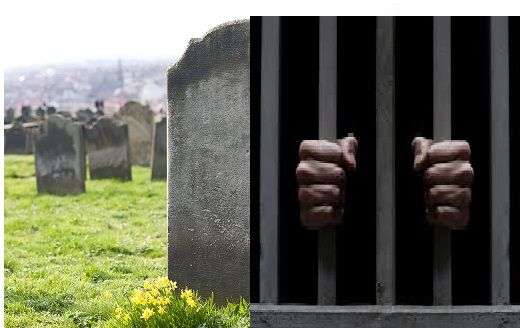 A LETTER FROM THE GRAVE: How I died in prison
……………………………………………..
My name is Late Mr. Adeyemi Shittu. I died in January 2016 at Ikoyi prison in Lagos state at the age of 34 years. Before my death, I was a native of Okeho town in Kajola Local Government Area of Oyo state but I was born and bred in Ijesha, Lagos state.

I attended Baruwa primary school, Ijesha in Lagos state. I did not attend any secondary school because I lost my father.

I was living with my mother at No. 17 Celestial road, Igando, Lagos state until her death in 2009.

Sometime in August 2010, I went to an Indian hemp smoking joint located at Idi-oro in Mushin, Lagos to smoke Indian hemp where I met two guys named Alayo and Wasiu. They introduced me to their robbery gang because they saw that I have a motorcycle. They gave me one locally made small gun and some cartridges.

The first robbery operation I followed them to was at Lagos University Teaching Hospital (LUTH) Idi-Araba, Mushin where we snatched people’s bags at gun-point especially women. We also robbed at a spot called “Empire” which is located in Surulere close to Albati Military barracks Lagos and we collected one Boxer motorcycle from the owner.

On Sunday the 7th day of November, 2010 at about 1pm, I carried my partners Alayo and Wasiu on my bike to Ilasa Lagos where we snatched one motorcycle from the owner and Wasiu mounted it and was riding it to escape while I and Alayo were on my own bike trying to escape too. Suddenly, okada riders started chasing us and they pulled my bike from behind and we fell. Alayo who I was carrying on my bike escaped while Wasiu also escaped with the other motorcycle we just snatched from the owner.

Immediately I fell, I threw away my gun under a parked vehicle in front of a nearby house before some policemen came to rescue me from the crowd who have already started beating me.

The policemen searched my pockets and recovered two cartridges of live bullets. I was quickly taken to the police station where I made my first statement on the 8th of November 2010 telling this particular story.

My eventual journey to the land of the dead began after I was arrested and charged for armed robbery at the Magistrate court. After the charge was read to me, the magistrate declined jurisdiction to hear my case saying because the offence of armed robbery charged against was capital in nature, it does not have the powers to entertain it. I was therefore remanded in Ikoyi Prison, Lagos on the orders of the magistrate pending the issuance of the legal advice of the Director of Public Prosecutions (DPP) of Lagos state who then was Mrs Olabisi Ogungbesan but who was later appointed a judge of the Lagos state judiciary.

While in prison, only my sister Romoke came to visit me.

It took the office of the Director of Public Prosecution almost two years to issue a legal advice on my case. After issuing the legal advice stating that I have a case of armed robbery to answer, a first information report (FIR) which included a charge was filed against me at the High Court of Lagos state.

Despite filing the charge against me in 2012, I was not brought to court neither was I arraigned until sometime in April 2013 making it three years I was in prison without trial.

All this while I was in prison, I could not hire a lawyer that would defend me and so shortly after my arraignment, the Lagos State Office of the Public Defender got a lawyer to defend me free of charge.

After my arraignment in April 2013 at the Lagos State High Court, Igbosere Judicial division before Honourable Justice Aishat Opensanwo, my lawyer filed a bail application which the prosecution did not reply for about six months. However, after they replied it and the application was later heard by the court, the court refused me bail.

All this while, I have been very sick in prison. The medical facilities in Ikoyi prison were insufficient to attend to my ailment and my medical condition was worsening by the day.
Seeing my worsening health condition, my lawyer re-applied to the court to have pity on me and grant me bail to go and treat myself. The court did so but with high and difficult bail terms which I could not meet and so I have to remain in prison. I became so sick that I could not even go to court when my case was due for hearing.

This made the prison authority at Ikoyi prison to write to the court if perhaps my bail conditions could be reviewed. This was done yet the reviewed terms were still high for me to meet as none of my relations was coming to see me in prison again not even Romoke my sister.

As my health condition was becoming extremely critical, the court granted me unconditional bail just for me to go and treat myself but nobody came to the prison to take me. My lawyer contacted my sister Romoke to come and carry me and go to hospital but she was reluctant to do so. The prison officials could not take me to any hospital.

Sometime in January 2016, I gave up the ghost and died right inside Ikoyi prison. Till now, there are others like me in prison.